Meet Jory, my tuxedo kitty. Not only is he no longer puss in boots, he’s out of my jacket, my couch, and even my skin. His sharp little toenails anyway. Although he is an indoor-only cat and doesn’t need his nails for defense or escape, Jory still enjoys sharpening his 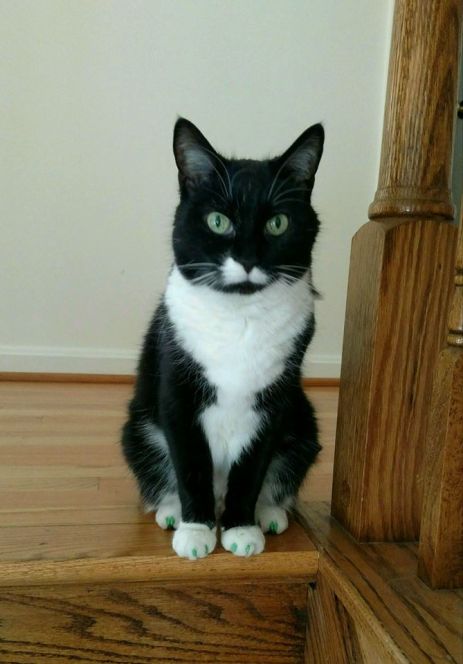 claws. For reasons known only to him, his favorite texture to perform this task on used to be anything made of leather. My riding boots are put through a lot of wear and tear already, including plenty of scuffing on the left toe area due to shifting gears. If I forgot to hide my boots in a closet, Jory usually managed to add to the well-worn look by adding scratches all around the ankles. Ditto to leather jackets, his ability to give a new one a vintage look with a few swipes of his paws was incredible. Meanwhile, he ignored actual scratching posts.

It also wasn’t much of a surprise to walk through my living room and have to remove Jory from the back of the couch, dangling there by his claws. My typical response was to shrug all this off with the thought that as a long-time pet owner I just wasn’t meant to have nice things. My boyfriend is not as laid back when it comes to his belongings, like his favorite recliner which just so happens to be covered in leather. Not to mention his preference for his skin to remain intact as Jory could draw blood sometimes accidentally while playing. When we decided to become one happy family under the same roof, (along with Jory comes Legend, the Border Collie), he asked if having my cat declawed was an option.

Did I consider it an option? In a word, NO. This meant I needed to do some research and find an alternative that would lead to a peaceful, skin-all-in-one-piece, compromise. I’d become a fan of Kingsbrook Animal Hospital after taking my dog there, and my solution came quickly enough by picking up the phone. Until I called KAH, I didn’t know there were soft, vinyl caps that could be applied over the cat’s nails. There are several different brands and names, but the packages are all basically the same consisting of the nail covers and an adhesive.

Anyone who trims their own cats’ claws, or plans to start using the tips on a young cat probably has a good chance of simply buying the vinyls and applying them at home. In my case, Jory was 10 years old before I needed and found out about the product. While he is very affectionate, he will not hold still long enough for me to apply a full set of the covers. I simply buy them, take Jory and the tips to KAH, and the vet techs trim his nails and put the caps on for what I find to be a very reasonable price. If a stray tip falls off between vet visits, I can manage to sneak up the cat while he’s still long enough to replace it myself. Otherwise, I keep the covers in stock and make an appointment for his KAH visit whenever needed, or about every six weeks. I was very skeptical about the tips staying on for more than a few days when I first tried them, but they do last! That’s one of the reasons I take Jory in for a new set every other month so they do not grow out too long and irritate his paw pads.

Clear covers are available, but I must admit I love the colors. Not only is it easier for me 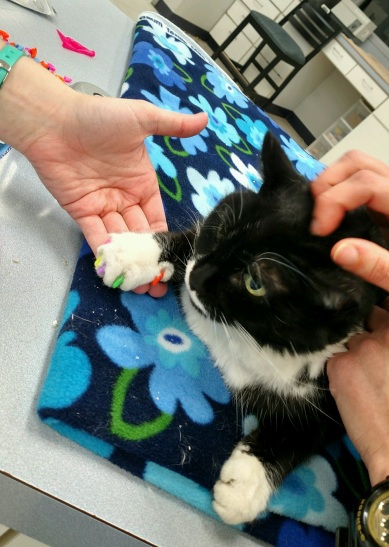 to spot if a tip is missing, it’s so much fun deciding what hue to choose next! I’ve picked green to match his eyes and glittery black or blaze orange if it’s Halloween. The vet techs even seemed to have a blast at his pre-Easter appointment this year. I took in a huge bag of the caps in assorted colors, asked them to use the ones that looked like jelly beans, and to mix the vinyls all up in any way they wanted.

Jory acts like he doesn’t even notice the covers are on, and the scratch-free environment keeps the household happy. Well, except on appointment days when the pup shows signs of dismay that the cat got to ride in the car while she didn’t. But I do make it up to her.

One thought on “Puss not in Boots”