Slumber Party – Whether you’ve been an active participant at one or just in the vicinity, those two words should evoke memories of all-night whispers, laughter, and music. But what would happen if a few hundred women had a sleepover in the woods and most of them arrived by motorcycle? You wouldn’t have to worry about keeping it down to a whisper then, now would you? I had to get my answer to that question and a few more. With a tent strapped to the bike and all the bags full of supplies, off I rode one weekend in May.

My friend Bev had turned my attention to this event online ahead of time, The Fox Run Moto Camp Out in Lancaster, PA. It was inspired by a cross-country ride that founder Lucy Sarah took in 2013 to a motorcycle show in California. She met a lot of female riders there, and wanted to host something similar that united women and brought them together in one area.

So, what does happen when over 300 bike-loving, adventure-seeking women go camping? For one, you reunite with friends and make new ones. I hadn’t seen Bev in years and it was good to catch up. I also got to meet some of the awesome women she rides with in a network formed to help moto-fixated women connect, The Litas.

What else do you do at The Fox Run? Ride in beautiful Lancaster County taking care to watch for horses and buggies. Cheer on burlesque dancers then turn to oooh and ahhh over a fire dancer. You yourself dance half the night away to fantastic entertainment. Do yoga. Swap trip stories and check out all the bikes. Shop from sponsoring vendors for riding clothes and gear, food and drink, and more. Like Tarot readings. I had to take advantage of the opportunity to have my cards read by a professional and Hope Diamond was amazing. She gave me lots of insight, as well as some sound advice I’ve been reminding myself to take heed of ever since.

Lucy highlights competing against Marina Grubb in the slow races as one of her favorite memories this year. She and the team of organizers are already planning for the third annual Fox Run next spring. Plus, an inaugural co-ed Moto Camp Out is in the works for late September 2017 to coincide with Open House happenings in nearby York, PA. For details check out thefoxrun.co

The older I get, the more I seem to forget. Then again, maybe my memory was never the best to start with…I don’t remember. See how vicious that cycle can be?

I’m sitting at my desk which is covered with a smattering of Post-it notes, reminders of all sorts of things scribbled all over them. I’ll admit there is a bit of a festive feel, like the Memory Fairy marched by tossing giant-sized confetti my way to help me out. But it’s a beautiful day and I’d rather be riding.

Since I can’t head out yet my alternative is to ignore the multi-colored lists and dream of trips that are on the way, or reminisce about others past. Thankfully some of those stick in my mind as easy as the words of a song I can sing along to even if it’s been twenty years since I heard it last.

There are people you meet that can make certain rides memorable. A chance encounter with one such person has left me with words I’ll never forget. It happened during an outing where about 6 or 7 of us girls had taken the scenic route to a bike show. We stopped at a bar and grill on the way back and were seated at a long table in a section set up for larger parties. There was some sort of a celebration going on next to us, but I didn’t pay much attention to anything outside of our own shenanigans.

At one point, I thought a fly had landed on my shoulder, and I still thank God I looked back instead of swatting at it because I would have smacked her hand. No bug there- I was facing a tiny, elderly lady from the other occupied table who had come over and tapped me. Thinking we must have gotten loud, (who us?), to the point of disturbing her I got ready to apologize.

Instead she leaned over and said, “I just wanted to let you know I think what you ladies are doing is wonderful, and I wish I’d had the nerve when I was younger.”

It took me a second to realize she was talking about riding motorcycles rather than scarfing down burgers. The boots, bandanas, vests, and the like must have given us away. Still, I wasn’t sure what to say at first. Usually if someone tells me they want to ride a motorcycle I tell them to do it. Given her apparent physical limitations I realized that response would have been asinine so I simply thanked her. Little did either of us know how many times I’d think of her and thank her after that. Basically, any time I just needed that extra nudge to get my nerve up to step out of my comfort zone and try something new.

The man who had helped her walk over, (her son I think), gave us all a good laugh with a story about the one and only time he ever got on a bike. Decades before, his buddy bought a motorcycle and offered to give him a ride. He got on the back, then wound up on his back after falling off when the friend sped away. Meanwhile the older woman stood and beamed at all of us as if we were actual members of her family. I suppose in a way we are, kindred spirits or sisters looking for adventures big and small. I hope she had many of her own, even if none of them involved riding motorcycles. 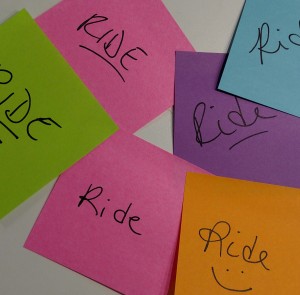 What about you? Plenty of things beyond our control can stop us from doing something we want to do. There are also goals we wish we could reach, and the main obstacle is simply working up the nerve. Think of what you would like to experience before it’s too late and go for it.

With that it’s about time for me to switch gears from looking back to planning for rides coming up, which means making more sticky lists of things I’d better not forget to do or pack. Now if only I could remember where I put my pen.