A present to remember… 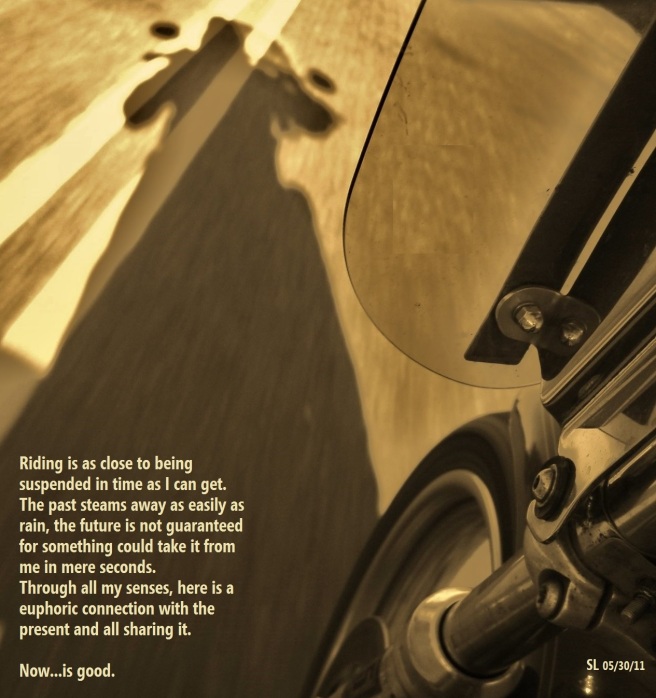 “When you drive a car, it’s like watching a movie. When you ride a motorcycle, it’s like being in the movie.”

I can’t remember where I’ve heard those words, but it’s a decent analogy of the difference between riding on a motorcycle and traveling inside a vehicle. It’s not easy to describe that feeling of heightened awareness, especially to someone who’s never been on a bike. There’s more of a sense of being in the moment, and a connectedness with your surroundings when you’re in the wind as opposed to driving in something with more climate control. It all adds to the excitement of a ride and the suspense of what could happen next. Especially if a wild animal is involved.

In my last column, I mentioned a black bear sighting while riding on Skyline Drive. Here are the details of a slightly unnerving, yet awesome experience. In the summer of 2009, I rode up into the mountains with my friend Debbie to take advantage of the cooler temperatures at that elevation. I was in the lead as we enjoyed Skyline’s big sweeping curves and scenery, mostly by ourselves since it was a weekday and the traffic was light.

Our ride was interrupted when I noticed a man on a bicycle pulled over on the side of the road. While passing him, I realized he wasn’t just waving, but signaling for us to stop. When I did, he came up alongside me and asked if he could ride through with us. As I wondered exactly how fast this guy could pedal, the confusion must have shown on my face.

“There’s a bear up there, I’d just feel more comfortable going past it with you guys”, he explained. I looked where he pointed, up ahead on the mountain slope to our right. Sure enough, I saw a bear peeking out at us from the tall weeds before it lowered its head back down and was hidden from view.

Thoughts of oh, wow and cool flew through my head. I told him I understood and asked if he was ready to go. He nodded, then suddenly screamed, “NO! NO! THERE HE IS!”

I focused back on the hill to see our furry friend now lumbering down to the pavement, and that was the last I saw of the bicyclist. Don’t worry, he wasn’t attacked and eaten. I have no idea how long the bear had kept him engaged in this standoff, but that man was DONE! I caught a glimpse of him in one of my side mirrors making his escape back the way we had come. It occurred to me he probably COULD pedal fast enough to keep up with a motorcycle! With his knees pumping so quickly they became a blur, he resembled a big pink hummingbird in a helmet, and managed to whiz away in seconds.

I turned my attention back to the bear. Long and lanky, apparently an adolescent, he ambled his way onto the road in front of us. An oncoming pickup truck stopped in the other lane as the bear continued to cross in front of it. I watched in awe as it climbed up on the stone wall on our left. But instead of disappearing over it and down the side of the mountain, he turned back to face the road and sat down.

I wondered if this bear was young enough for mama to be nearby, and started to worry that if so- would she see our idling motorcycles as a couple of snarling enemies she’d need to attack in order to protect the baby? With the bear simply sitting and checking out his audience, I turned to see Debbie wearing a kid-at-Christmas-grin. Disappointed that neither of us could reach a camera quickly, we decided it was probably a good idea to get moving anyway.

Even without a picture I’ll always remember the way the bear looked as we eased by, at one point just a few yards away, keeping the bikes as quiet as we could. I hoped if it decided to chase us we’d have enough time to react and speed ahead behind the vehicles now lining up from the other direction. But it only leaned forward from its perch, head nodding and nose twitching as it sniffed at the air between us. That is one of the most memorable experiences I’ve had while riding a motorcycle.

Memories are part of what makes the winter months more…well…bearable! Over the past few weeks, days that were nice enough to get out on the bike were few and far between. Spring is on the way though, full of much better riding conditions. Let’s just hope it gets here as fast as that pink hummingbird guy could.