This has got to be one of the busiest summers of my life, to the point where I actually have to remind myself to take time to just breathe.

I can think back to an important lesson in time-management my mom gave me years ago. I was stressed out over how to juggle several responsibilities all at once. As I ran down the list of things that needed to be done over the phone with her I mentioned cleaning and that’s when she interrupted with a snort, “The dirt will still be there tomorrow.”

Whassssat?! When your own mother tells you it’s OK to procrastinate on housework it’s definitely time to relax and rearrange your list of priorities a bit! 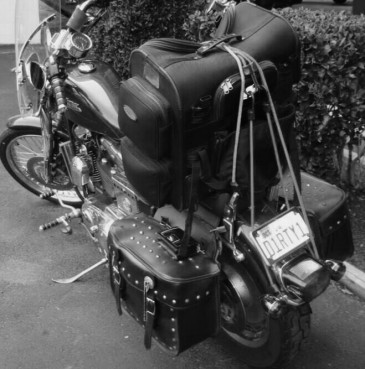 Maybe I took the advice to a fault earning my bike the nickname of “Dirty 1” because I’d rather spend time riding it that washing it, but that’s a different story.

In recent weeks I realized a lot of my riding had become errand driven, if I was on the road I was finishing up some sort of task and I was in need of an afternoon doing nothing but enjoying the ride. To fix that, one day I took the long way home from work with no real goal in mind.

A stop along the way brought me to a pub I hadn’t been in yet so I decided to have a burger and a beer on their patio. Shaded by vines and branches overhead, I continued to clear any worrisome thoughts from my mind and stay in the moment of a beautiful day. After a while I became aware of some chirping form above and spotted birds flying in and out of their nest.

As I watched and listened, I wondered what other small miracles I’d overlooked lately as a result of the preoccupation of making a few major life changes during the fun of the summer season. Reality check; time to reprioritize that dirt.

What needs to be tended to first is the dirt ridden over on two wheels to clear the mind, walked on with bare feet alongside the dog, or just sat on to let the spirit soar even as the body is still.

The rest will eventually be dealt with and if that’s not until tomorrow it’s fine. Momma said so.

3 thoughts on ““The dirt will still be there tomorrow…””