Sure, ‘tis the season when getting started on or even finalizing plans for Christmas will quickly become a priority for many of us. But visions of sugar-plums weren’t exactly dancing in my head as I got ready for a ride on a near 90-degree day in late September. Yet it was time for the elves of the Down Rider Fund to host their annual Toy Run. Each fall for over two decades, they’ve worked ahead to help struggling area families have a happy holiday season.

Jennifer Korrell, an event coordinator with the Down Riders, is happy to report that the run this year was a success. Seventy-four people registered for the ride which kicked off at Buckeystown Pub with additional stops in Woodsboro at JR’s, the Blue Ridge Sportsman Club and Blondie’s in Pennsylvania, and Cactus Flats in Frederick. The toys and monetary donations collected that day will be used by the non-profit organization to provide Thanksgiving dinners and Christmas gifts to local families, usually in or near Frederick County, Maryland.

Founder William “Bones” Weddle, Sr. established the Down Rider Fund with a desire to financially assist motorcyclists that have been injured in accidents, 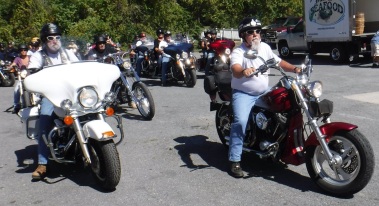 as well as the families of riders who did not survive. The group holds several fundraising rides and events each year including a pig roast in October. You’ll need to get tickets early for that one, as a typically sold-out crowd gathers for amazing food, good music, and more. There’s also the Memory Run which occurs on Father’s Day Weekend. Jennifer points out this ride as one of their most popular, with up to 150 bikes rolling through on an emotional day as lost riders are remembered.

To find out more about how you can get involved, see downriderfund.net for a calendar of events, monthly meeting details, and contact information.